I’ve been playing an on-line game called Abbatia. I’m addicted to it.

The mission of the game is to create an abbey which is associated to a religious order. Then you have to attract novices who will raise animals, write books, seed the fields in order to become a powerful abbey.
As it was expected I am a very bad player, lol; three of my monks are sick and I’ve spent more than I gain so I don’t know how I’m going to do to survive and not get bored on the way. 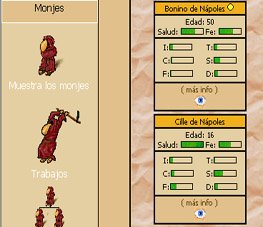 This blog was down for a while, thanks to my broken computer, time spent programming