How time passes and how I suffer without being able to have my daily doses of the Internet and be able to advance in my games: / hehehehe How exaggerated I am: P
In all these days not much has happened. I have met a couple of times with my crazy friends to celebrate that we are getting old and that we are still together. We have been together for five years and the last to join have been in the group for about 13 years.
I was in a girls’ school, that’s why they are all girls. This is my main group of friends, then there are my other friends known through high school, courses or the cycle I’m doing.
I see little of the latter but I would not like to lose contact so we go out whenever we can. I put a photo of my group together as a whole at a dinner we had at Christmas (I think). I do not say who I am hehehe if you find out I tell you if you were right or not:) 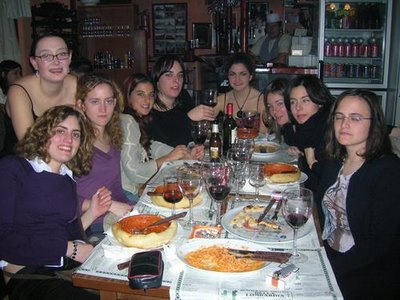 I was also in La Herradura one day with my sister and her boyfriend and despite the time I am spending (moderately) under the sun I am still white as milk (sniff).

And from my friend … A few days after meeting him I called him to meet and celebrate that we had approved and he told me that he would tell me when he could. I didn’t hear from him. Later a mutual friend came to my house and I sent him an SMS to come too. He responded with a simple “work later, another day.” And another day I told him if he wanted to stay and he didn’t answer me. So, obviously, the kid passes me by but what bothered me the most was the other day I logging at a videogame that we both play and I had a message from him telling me that if I could take care of him for a while, if not, he would try to do it. Not “how’s your summer going?” nor “how are you?” or “I’m going on vacation, I’m doing fine, the job is right” … nothing like that. I send him a text message and tell him that I can’t, that I don’t have his data, that he tell me and I do it, but he doesn’t answer me either and I know he’s been playing today.

En fins, that I am going to pass on him, definitely, and I am not going to send him to a very ugly place because he should do it by email (in person it is seen that it is difficult) and it is not as impressive; )

I would rather be able to vent and tell him everything I think, although I suppose I would not be able to.